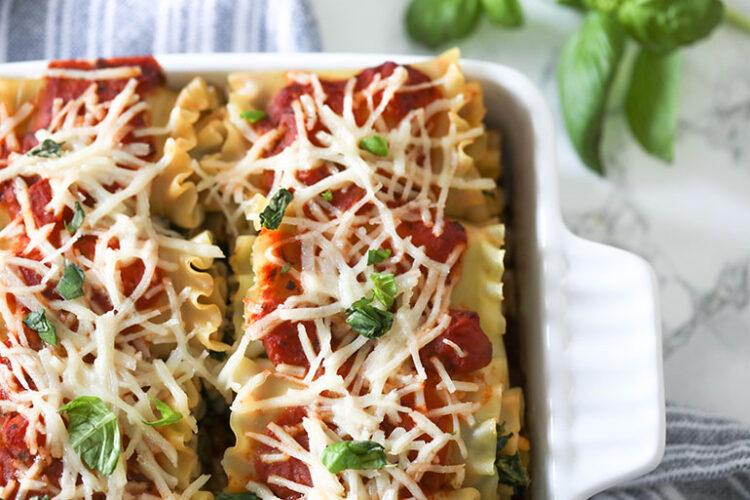 If you’ve ever doubted how amazing almonds could be in place of cheese, you NEED TO TRY THIS RECIPE! These Vegan Spinach Lasagna Rolls are made with an almond ricotta cheese and seasoned to perfection with all of the best seasonings to pack each bite with flavor!

I’ve said it before and I’ll say it a million times more. I looooove pasta! It’s been a while since I’ve made spinach lasagna rolls. These used to be one of my favorite meals prior to making “the switch.” I do remember making them when I first transitioned using vegan friendly subs, but it just wasn’t quite the same.

Well, that was almost three years ago and a lot has changed since then. I’ve learned soooo much more about homemade vegan alternatives (like using almonds to make ricotta cheese). I saw a picture of some lasagna rolls and figured now would be the perfect time to revisit one of my old favorites.

If you watch my IG stories, you know that I recently meal-prepped these Vegan Spinach Lasagna Rolls for lunch. They turned out so well! This was definitely one of those weeks where I was too hype for lunch time to come around every day! I paired it with some sautéed broccoli and a test version of some vegan cheddar bay biscuits. Pure heaven!

How to Make Vegan Spinach Lasagna Rolls with Almond Ricotta

Making these Vegan Spinach Lasagna Rolls is so easy. You’ll want to start by gathering all of your ingredients. There’s nothing worse than starting on a recipe only to find out that you’re missing something halfway through!

Once all of your ingredients have been collected, you can start making your Vegan Spinach Lasagna Rolls by preparing the noodles and frozen spinach. It’s important to make sure that your lasagna pieces aren’t overcooked because you’ll be rolling them later on and you don’t want the pasta to fall apart. As long as the lasagna is cooked al dente, you’ll be good to go!

Boil your water in a large pot, and allow the pasta to cook for as long as necessary, referring to the package instructions. Once the pasta is finished cooking, drain the hot water, then fill the pot up with cold water in order to keep the noodles from sticking and to force the noodles to stop cooking.

On another eye, cook your frozen spinach over a medium-low heat, stirring frequently. While the spinach is cooking, you can start adding all of your ingredients for the almond ricotta to the food processor or high-speed blender (whichever you choose to use). Once all of your ingredients have been added, blend the mixture on high until the mixture is well combined and resembles ricotta cheese. Set aside.

Season the frozen spinach with salt and pepper to taste. Once the spinach is finished cooking, drain the water using a mesh strainer or colander. For this step, I found it most helpful to press the spinach into the strainer using the back of a spoon in order to press the water out. Set this aside for later use.

At this point, all that’s left to do is start rollin’! This is the fun part 🙂 To make this step easier, you could mix the spinach with the almond ricotta in order to spread it over the lasagna rolls all at once. Unfortunately I forgot about this I prepared them, so I added them separately. Either way works!

When creating your rolls it’s important to use the filling sparingly in the beginning. There’s nothing worse than running out of the almond ricotta and spinach mixture prematurely. When I was testing this recipe, I ran out early and had to unroll a few in order to finish all 8 of them. Yikes! Don’t end up like me, y’all.

Spread a little bit of marinara sauce along the length of the lasagna piece, then evenly layer the almond ricotta, spinach, and vegan mozzarella cheese. Starting with the end closest to you, roll up the lasagna piece as if you were creating a pinwheel. Repeat this step until all of your vegan spinach lasagna rolls have been rolled.

Once all of the rolls are done, place them in an 8×8 square baking dish and top them with a generous amount of marinara sauce (I typically add more on later for serving) and more vegan mozzarella cheese. Cook them in the oven for about 20 minutes then top with fresh basil. Voila! Dinner is served.

Store these Vegan Spinach Lasagna Rolls in an airtight container for 4-5 days.

Can These Lasagna Rolls Be Made Gluten Free?

Yep! simply swap traditional lasagna sheets for your favorite gluten-free version. Just be sure to keep an eye on them as they’re cooking so they don’t end up over-cooked. In my experience, cooking gluten-free pasta according to the package directions is typically too long.

Can They Be Frozen?

The wonderful thing about these vegan spinach lasagna rolls is that they can be made ahead of time! Make this dish as instructed below and let them cool completely. Then store them in an air tight container and freeze them for up to three months. 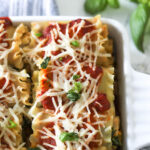