Wanna know why I love a good pasta dish? They’re typically pretty easy to make and the leftovers are always a hit! That definitely holds true for this Easy Vegan Sun Dried Tomato Pasta recipe. The light, but flavorful sauce is made up of sun dried tomatoes, lots of garlic and vegan parmesan cheese.

One of the reasons I love this Vegan Sun Dried Tomato Pasta is because it’s so easy to make! To start, you’ll want to begin boiling a large pot of water in order to cook your pasta according to the package directions. While the pasta is cooking, you can begin making the sauce.

The sauce for this pasta isn’t extremely thick or creamy so don’t expect it to be, but also know that it lacks nothing in flavor!

In a large sauté pan, toast your sliced almonds until they’re lightly browned over medium heat (just the almonds, nothing else). Be sure to stir occasionally. It’s important to note that when you’re doing this, there’s no need to add oil or water to the pan. Since we’re just lightly toasting them, anything more is unnecessary and could cause the almonds to stick (which we don’t want!).

At this point, you’re ready to add in the vegetable broth and vegan parmesan cheese. Whisk the mixture together until the cheese is melted and everything is well combined.

By now (or likely before now), your pasta should be done. Drain the pasta, but reserve some of the pasta water in case you’d like to add it to your sauce. This is totally optional, but it’s always nice to have in case you need it. I didn’t end up needing it, but you might find it necessary perhaps depending on what type of vegan cheese you use. Some may thicken more than others.

Add in the sliced cherry tomatoes and stir them into the mixture. Allow them to cook until they have softened and have wilted slightly.

Now that both the noodles and pasta sauce is ready, add the pasta to the sauce and stir to combine so that all of the noodles have been coated. Plate your Vegan Sun Dried Tomato Pasta and garnish with the toasted almonds, fresh parsley and a pinch of salt. Done!

What Else Can I Add to this Dish?

There are lots of things you could add to this Vegan Sun Dried Tomato Pasta, but here are my top 3 recommendations!

Do I Have to Use Penne Pasta?

Nope! You can also use linguine or even spaghetti noodles. Since I have a 9 month old, I generally try to use penne for a lot of dishes so I can share with him. They’re much easier for him to pick up to feed himself for a little self-led baby weaning action.

I know you’ll love this Vegan Sun Dried Tomato Pasta! The most prominent flavor in this pasta is the sun dried tomatoes. It’s made from scratch, using fresh minced garlic, vegan parmesan cheese, vegetable broth and sun dried tomatoes. It’s easy to make, perfect for customizing and doesn’t require any cream like a lot of other recipes! Give this recipe a try and let me know what you think in the comments below! 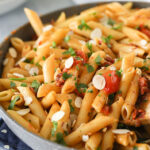