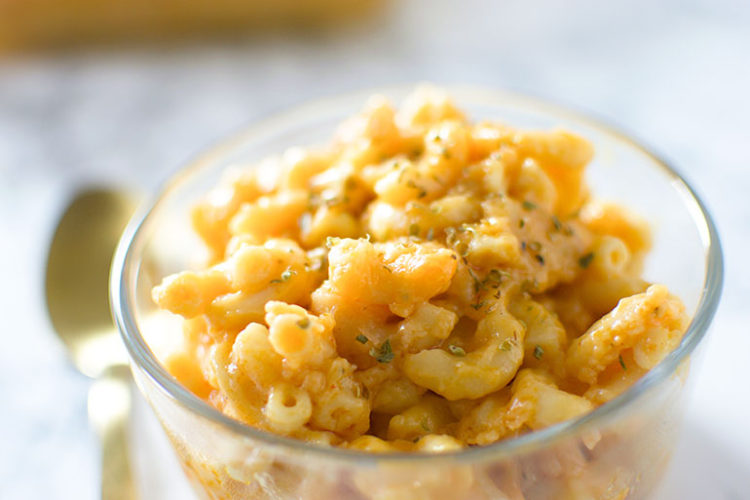 They say that one of the hardest things for folks to give up when going vegan is cheese. I can definitely see why! Before making the switch, I probably ate cheese 5-6 times a week. Most likely more! One of my favorite things to eat has always been mac and cheese. After going vegan, this was definitely a challenge for me. I’d tried a few vegan versions, but nothing ever tasted close to the real thing. Good vegan mac and cheese is hard to come by. Lucky for you, I’ve got an Easy Baked Vegan Mac and Cheese recipe that delivers!

How to Make Baked Vegan Mac and Cheese

Making this Easy Baked Vegan Mac and Cheese is really simple. With just a few ingredients, you’ve got yourself a tasty side that’s ready in no time! Like any vegan mac and cheese recipe, you’ll want to start by boiling the noodles. Once those are finished, you’ll drain the water, then coat them in a tablespoon of butter. The butter will not only add flavor to your mac and cheese, but it will also help keep the noodles from sticking together while you’re preparing the “cheese sauce.”

Choosing the type of vegan cheese to use is totally up to you, so choose your favorite! Lately I’ve been enjoying the new vegan cheese from Whole Foods’ 365 Everyday Value brand. It’s less expensive than most other brands ($3.99) and gets the job done!

As for other national brands, I also enjoy Violife and Chao (Field Roast). I used a pretty moderate amount of cheese for this recipe (2 cups/ 1 package). However, if you want to go all out, you could opt to use even more for EXTRA cheesiness! I tried using 4 cups and that seemed a little OD, so I think I’ll stop at 3 next time. 🙂

Tips for making this Easy Baked Vegan Mac and Cheese

Because this is such a savory dish, it’s important that the plant milk you use is unsweetened. I used my old faithful almond milk, but as long as your milk is unsweetened, I’m sure that soy milk and others would work fine here too. If you’re thinking about getting creative, and adding in some nutritional yeast… DON’T! It’s gross and tastes soooo inauthentic. Trust me, I’m speaking from experience! I think this is where a lot of people go wrong when making vegan mac and cheese. It seems like the perfect addition because nutritional yeast is known for adding a nice “cheesy” flavor. Welp, it doesn’t work here.

You might also be tempted to add a little extra vegan cheese to the top before putting the dish in the oven. I’d advise against this too. When I tried this, it left a lightly crispy cheese layer on the top. If you reaaaally want to do a top layer of cheese, I think covering the dish with aluminum foil might help. My experience could have also been due to the brand of cheese I used. Some perform differently than others.

I’ve tried a lot of different versions of vegan mac and cheese and this is by far one of my favorites. I served this as part of my vegan Thanksgiving dinner spread and both my husband and dad really enjoyed it! Believe it or not, my husband even went back for seconds. SHOCKING! I look forward to trying this recipe in different variations. I’m thinking a white cheddar version next… Or maybe even a combination of different vegan cheeses.

How to Store Vegan Mac and Cheese:

What to Pair with this Easy Baked Vegan Mac and Cheese Recipe:

I’ve got LOTS of ideas for you to make this into a complete meal! I’m a southern girl at heart and I love some good ol’ vegan comfort food. Here are some of my recommendations on what to pair with this Easy Baked Vegan Mac and Cheese:

I know you’ll love this Easy Baked Vegan Mac and Cheese recipe! It’s thick and creamy, plus it’s super reminiscent of the real thing! Give it a try and let me know what you think in the comments below! 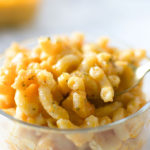