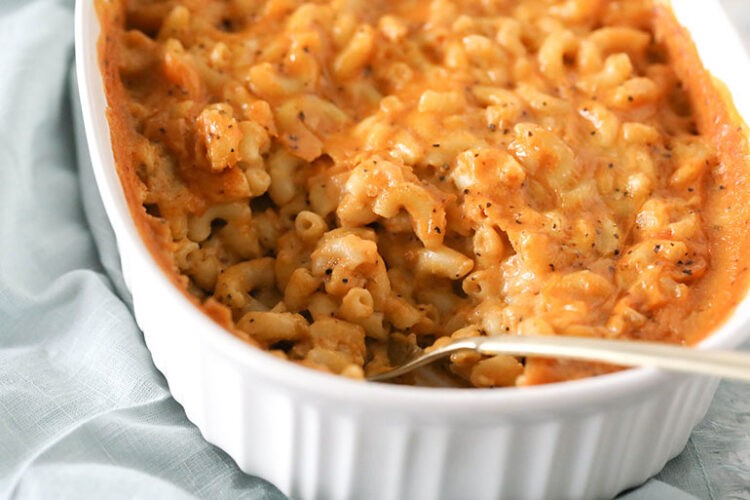 No holiday is complete without a side of vegan mac. Am I right, or am I right? Well if you’ve been here for a while, you know that my original mac and cheese recipe has always been my go-to, but with the holidays coming up I wanted to do something different.

This elevated 4 Cheese Vegan Baked Mac and Cheese is my best recipe yet! It’s even #PickyAssHusbandApproved!

Okay, now I know you’ve probably already started to add up the cost of the recipe ingredients. We all know that vegan cheese is sometimes a little pricey, but I promise it’s worth it! This dish is creamy, super cheesy and overall just plain damn delicious!

How to Make 4 Cheese Vegan Baked Mac and Cheese:

Making this 4 Cheese Vegan Baked Mac and Cheese recipe is really simple. You’ll start by preheating your oven so that it’s ready to go when needed. Next, you’ll cook the macaroni according to the package instructions.

You want to make sure that your noodles are al dente and not overcooked. The pasta will continue to cook a bit when being baked and there’s nothing worse than mushy mac and cheese.

Once the pasta is finished cooking, drain the the water from the pot (don’t rinse) and transfer the pasta to an appropriately sized baking dish. Stir in two tablespoons of vegan butter and set it aside.

Up next, we’re ready to make the vegan cheese sauce. In a medium sized pot, melt two tablespoons of vegan butter and whisk in the flour until you’ve created a smooth paste.

Add in the unsweetened almond milk (or sub another unsweetened plant milk) and continue to whisk it into the vegan butter and flour mixture until it’s combined. Bring the mixture to a boil, then reduce the heat to a medium temperature.

It typically includes anchovies or fish sauce, so it’s important to find a version that doesn’t have these as ingredients. Luckily, they aren’t hard to find. I’m currently using this one I found at Whole Foods.

Continue whisking all of the ingredients together until the mixture is smooth. Next, combine the cheese mixture with your pasta and place it in an appropriately sized baking dish and transfer it to the oven to bake.

I’ve found that most vegan cheeses don’t brown like dairy, so if this is your first time making baked vegan mac and cheese, don’t look for it to brown overtop to indicate that it’s done.

Thirty minutes should do just fine. Once it’s finished, allow the 4 Cheese Vegan Baked Mac and Cheese to cool for 15-20 minutes before digging in. Enjoy!

What’s the Best Vegan Cheese to Use for 4 Cheese Vegan Baked Mac and Cheese?

Honestly, the best vegan cheese to use is whatever vegan cheese you enjoy most. Mac and cheese is a comfort dish, so choose a vegan cheese that reminds you most of what you may have eaten growing up.

Have you not tried a lot of the vegan cheese brands? That’s fine too. My personal favorites are Violife, Whole Food’s 365 store brand and Daiya. These are the ones I purchase the most. I’m sure there are other great ones too. For this recipe, I used all selections of Violife.

I’ll admit, I’ve never been the biggest fan of cream cheese, so it’s hard for me to say what brand is “the best,” but if I had to choose one I’d go with Kite Hill. No matter what I’m making, their cream cheese has yet to let me down. It bakes just as well as dairy.

What to Pair With 4 Cheese Vegan Baked Mac and Cheese:

I know you’ll love this 4 Cheese Vegan Baked Mac and Cheese recipe! It’s creamy, delicious and the perfect side dish for any meal. Give this recipe a try and let me know how it goes in the comments below!

I used Violife shredded cheese and for the cream cheese I used Kite Hill, but you can use whatever brands you enjoy most.