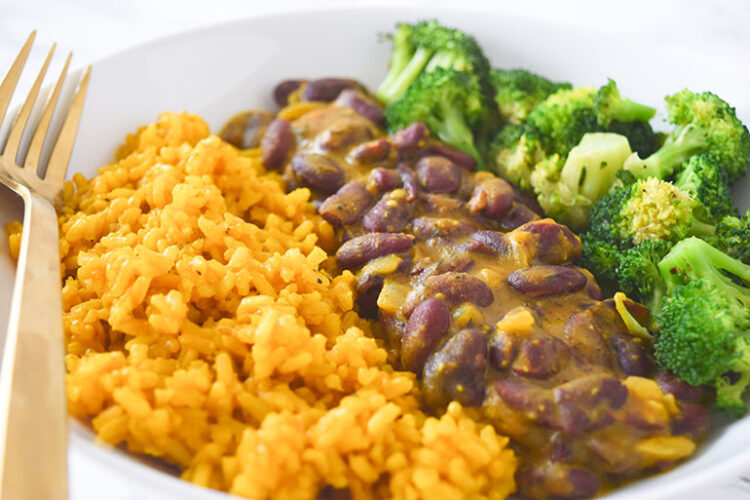 Okay, so lately I’ve been on this whole “minimize the grocery bill” kick. I’ve been building meals around the items that I currently have in the fridge and pantry to help inspire the grocery list. These curried red beans and turmeric rice are a perfect example. In my pantry I noticed that I had 1 can of red beans, some rice, and a bunch of spices. After thinking about what kind of beans and rice dish I could make, I immediately thought of the Maharagwe Ya Nazi from The Palace International. This is one of my favorite spots to visit for lunch or dinner. Everything is always seasoned just right and it’s so filling! Plus the vegan options are clearly labeled. Doesn’t get much better than this, folks!

While I was inspired by the Maharagwe Ya Nazi, this dish isn’t exactly like that. The Palace International cuisine is more South African. I chose to give this dish a Jamaican vibe using a Jamaican curry blend. I also chose to add in some turmeric rice (like the dish from The Palace- read more about Turmeric here) and something green which was broccoli in this case.

The only thing I had to purchase from the grocery store was an extra can of beans, some coconut milk, a plantain, and veggie broth (I was running low). Everything else I already had! The onion I used was leftover from my Hungry Harvest Box, which was perfect timing!

I always have a bag of rice on hand and the other ingredients were mainly spices. Most of which you probably already have. Do you see what I mean by creating meals around items you already have? For this meal, I probably spent about $5.50, which is $1.38 per serving! WOW! Just imagine what your grocery bill could look like if you did this every week for every meal!

The cool thing about this Curried Red Beans dish is that the items I had to buy like the coconut milk and veggie broth were items that would last beyond this one meal. So even though I bought them for this dish, I could use the remaining coconut milk for a smoothie, and the veggie broth for another meal later in the week.

Without a doubt, there will be some grocery trips where you’ll spend a little more than you want because you need to replenish the basics. For me, this happened last week. I was all out of almond milk, bread, and frozen veggies!

So if you’re like me and you’re trying to cut back in your budget, try choosing areas where you actually have some flexibility. For me, this was our grocery bill. Every week our fresh veggies were going bad before we would have a chance to use them and I felt like I was throwing money down the drain. Trust me, once you start throwing out half containers of fresh fruits, you’ll understand. So here’s what you do:

These curried red beans are comfort food at it’s finest! The turmeric rice is simple, but makes for a great pairing with the beans. Get fancy like I did and add in some plantains! Guaranteed to have you floating on a cloud! I can’t wait for you to try these Curried Red Beans and turmeric rice! I know you’ll love it! When you do, let me know what you think in the comments below! 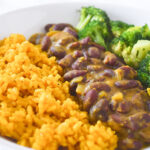