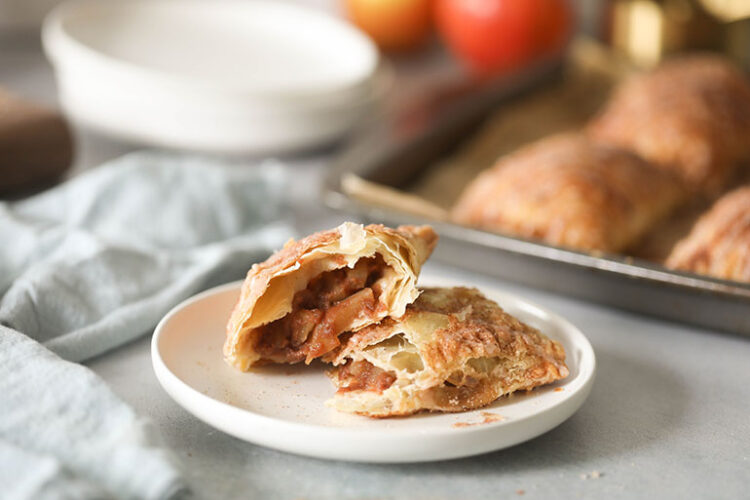 These Vegan Apple Butter Hand Pies are about to become your new favorite treat! They are so easy to make and tastes like something out of a bakery, only better because you made it!

Making these Vegan Apple Butter Hand Pies is super easy because you’re using puff pastry dough which means you don’t have to prepare your own. Some people might call this cheating, but to me it’s just plain smart!

To begin you’ll want to make sure your puff pastry sheets are thawed. Generally puff pastry sheets can be found in the frozen food section of the grocery store which means they will need to be thawed ahead of time before working with them.

I typically like to transfer mine from the freezer to the refrigerator the night before I plan to use them, however I recently learned that you can also defrost puff pastry sheets in the microwave in about one minute. So if you are pinched for time be sure to check out the package instructions on your puff pastry sheets for details on how to thaw them properly.

For these Vegan Apple Butter Hand Pies you’ll need fresh apples so you’ll want to clean them and remove the skin. Next, dice the apples into small pieces (about 1/2 inch) and set them aside. I always find it easiest to go ahead and gather all of the remaining ingredients and measure them out so that they are ready to go when I need them. This makes the prep process so much easier!

While we’re on the topic of prepping, it’s a good idea to pre-heat your oven to 400 degrees and line a baking sheet with parchment paper so that they’re ready.

Once your puff pastry sheets have been thawed, unfold them onto a clean work surface that is lightly floured. Gently press each sheet out then use a knife to cut into four pieces and set aside.

In a small bowl combine your diced apples with your apple butter. Place about two spoonfuls of the apple mixture toward the bottom of the cut puff pastry sheet, then grab a small dish to fill with water. Dip your finger into the water and spread it along the perimeter of the pastry sheet. Fold it over then use a fork to press along the edges in order to seal it together.

Repeat this process until all of the puff pastry sheets have been filled and set them aside onto your baking sheet lined with parchment paper.

Once all of your apple butter hand pies are filled, brush the top of each of them with a generous amount of melted vegan butter. Next, mix together the cinnamon and sugar. Sprinkle each of the hand pies with the mixture and transfer them to the oven to bake.

While the apple butter hand pies are baking, mix together the ingredients to make the cinnamon icing and set it aside. Once the Vegan Apple Butter Hand Pies have finished baking, remove them from the oven and allow them to cool for a few minutes before adding the drizzle. Once they have cooled, drizzle the icing over top each of them and enjoy!

Can These be Made Ahead?

Because these Vegan Apple Butter Hand Pies are best served fresh, it’s tough to really make them ahead of time. I would recommend opting to do the prep ahead of time. This would include dicing the apples and combining them with the apple butter or prepping the puff pastry sheets so that they are already rolled out and cut into rectangles. You can prep each of these steps, then store them in an airtight container in the fridge until you’re ready to use them the next day.

The puff pastry sheets just tastes better fresh out of the oven. In my experience, reheating them results in underwhelming pastries.

Which Puff Pastry Sheets are Vegan?

For this recipe I used Peperidge Farm Puff Pastry Sheets. It turns out that they’re accidentally vegan!

I know you’ll love these Easy Vegan Apple Butter Hand Pies! They’re super easy to make and are the perfect treat to share with friends and family (or keep to yourself!)! Give this recipe a try and let me know how it goes in the comments below! 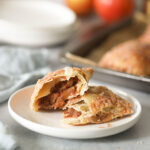