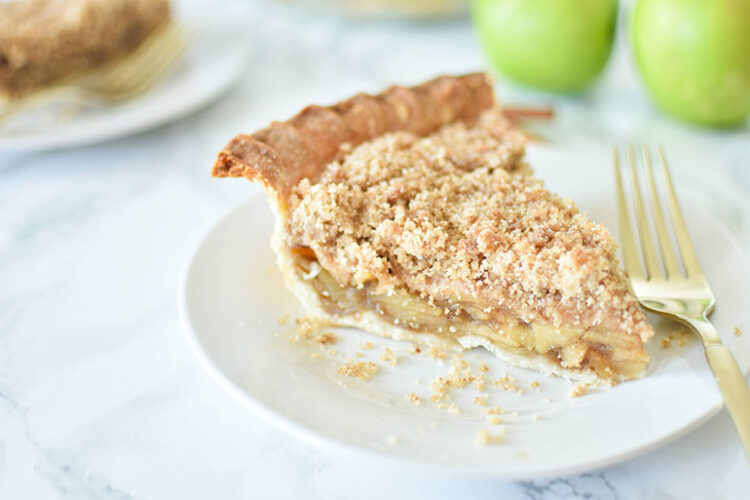 I’m so excited to share my recipe for this Easy Vegan Crumble Apple Pie with you all! It has truly been a labor of love testing it out for you to to make sure I get it right! I realized that making an entire pie from scratch can seem a little involved, but to my surprise, each component came together pretty quick!

What is a Crumble Apple Pie?

If you’ve never tried an apple crumble pie, prepare to be amazed! It’s very similar to a traditional apple pie, but it’s topped with a buttery, sweet crumbly topping that’s lightly crispy. The middle is made with layers of apples coated in a sweet, seasoned mixture all wrapped up in a perfectly flaky homemade pie crust. You might also hear this pie being referred to as a Dutch Apple Pie.

How to Make a Vegan Crumble Apple Pie

Okay, so you’re ready to make vegan Crumble Apple Pie huh? Perfect! There are three components to making this pie: the pie crust, the apple filling and the crumb topping. Together, they make for the most perfect vegan dessert!

How to Make a Homemade Pie Crust

To begin making your Vegan Crumble Apple Pie, you’ll want to start with the pie crust. Making a vegan pie crust is pretty simple. You’ll just need a few ingredients to get you started:

I find it easiest to make this vegan pie crust in my Vitamix or food processor, but it can also be made by hand. If you’re using a high-speed blender or food processor, begin by adding all of the dry ingredients (flour, powdered sugar and salt) to the container first. Pulse a few times to combine, then add the cold vegan butter and pulse until the mixture is crumbly. Now to form the dough, add in four tablespoons of ice cold water.

At this point, your mixture should resemble a dough. Before removing it from the container, go ahead and grease your pie pan with a little vegan butter so it’s ready when you need it.

Making the Crust By Hand

Now you’re ready to add in your ice cold water to turn those crumbles into dough! Slowly add in the water and continue mixing with a fork until the mixture is able to be formed into a ball. Done!

Transfer the ball of dough from the container to a clean work space with a few generous sprinkles of flour to keep the dough from sticking after being rolled out.

Roll out the dough using a rolling pin in all directions until you have a large sheet of dough that’s about 1/4 of an inch thick. Gently pick up the dough and transfer it to your pie pan and gently press the dough down into the pan so it sits nicely inside.

Use a pair of kitchen shears to cut away any of the excess dough that’s hanging over the edge of the pan and pinch the crust however you’d like in order to create a design around the edges. Then BOOM! Transfer that baby to the fridge until you’re ready for it.

Making the apple filling for this vegan crumble apple pie is really simple. During my testing, I experimented with a few different ways to make this filling until I finally got it right.

My initial approach to everything is “how can I create this dish in the easiest way possible?” For me, the easiest thing to do would have been to coat the fresh apples with the apple filling ingredients, toss them in the pie dish, cover it with the crumble topping, bake it and be done.

Welp, unfortunately that approach didn’t work out too well for me. When I tried it this way it resulted in a super runny filling after I cut into it, which also led to a soggy bottom crust. No bueno.

I found that the best way to prevent this, was to cook the apple filling on the stove to release the natural liquid from the apples and then add in the cornstarch and water mixture to thicken it. The result is a pretty thick apple filling which is perfect because it won’t ooze out terribly after slicing. WIN!

To make the mixture, all you need to do is peel, then slice your apples about 1/3 inch thick, then add them to a large pan along with the rest of the apple filling ingredients. Combine everything over medium heat until the mixture has thickened a great deal and the apples have softened. Once it’s done, remove it from the heat and set aside.

How to Make the Crumb Topping

The crumb topping is my FAVORITE part of this Vegan Crumble Apple Pie! It’s buttery, perfectly sweetened and a little crispy. To make it, you’ll start by combining all of the dry ingredients together in a large bowl, then add in your softened vegan butter that has been cut into pats (aka 1 tablespoon pieces).

To work in the vegan butter, use the back of a fork to repeatedly press it into the dry ingredients. Do this until it results in a crumbly mixture.

Alternatively, you can make this crumb topping in a high-speed blender or food processor. Simply add all of the ingredients to the container and pulse a few times until crumbly. Easy peasy!

Yes! You can freeze this pie, but wait until after it has finished cooling completely before doing so. Once it’s cooled, slice the desired amount and place it in an air tight container, then transfer it to the freezer.

How Do I Store Vegan Crumble Apple Pie?

If you follow my directions, this pie won’t last long at all! But if push comes to shove, you can store this Vegan Crumble Apple Pie a few ways. The first option is to simply cover the pie dish with plastic wrap and place in the fridge. Alternatively you could slice each serving and wrap it individually.

What Do You Eat with Vegan Crumble Apple Pie?

I like to keep things simple when I’m enjoying this Vegan Crumble Apple Pie. A lot of times I’ll eat it alone or I’ll top it with a generous scoop of vegan vanilla ice-cream (my favorite being the SoDelicious Very Vanilla made with cashew milk). It’s a match made in heaven!

Alternatively you could top it with a nice dollop of vegan whipped topping. SoDelicious also has a great coconut based alternative as well!

A traditional pie is typically topped using another layer of pie crust that can be a flat layer or made up of strips pie crust to create a design.

I know you’ll love this Vegan Crumble Apple Pie! It’s perfectly sweetened, homemade deliciousness! Give this recipe a try and let me know how it goes when you try it! 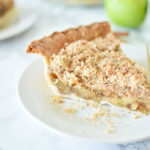