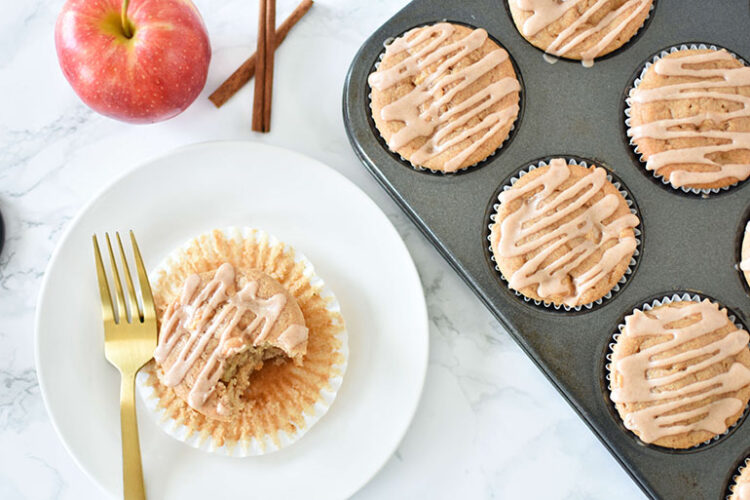 I’ve been on a real muffin kick lately! Since being quarantined, they’ve proven to be the perfect snack. Heavy enough to keep hunger at bay, and light enough not to fill me up. In addition, I like that they’re a “one and done” sorta thing unlike popcorn. Though I could eat an entire pan of these Vegan Apple Cinnamon Muffins, it’s highly unlikely. Now a bowl of popcorn on the other hand… I may or may not be known in my house to make large servings disappear in a day…

I love this recipe for Vegan Apple Cinnamon Muffins because it’s so easy to make! You’ll start by combining the unsweetened almond milk and apple cider vinegar to create a vegan buttermilk. You’ll notice that the mixture will start to curdle towards the bottom, which is exactly what you want. The vegan buttermilk will help to provide moisture to the muffins.

Once you’ve combined the mixture for the vegan buttermilk, you’ll want to dice your apple. Green Granny Smith apples are great for baking, so if you have one feel free to make use of it!

I normally purchase honey crisp apples, so I simply used what I had on hand. You’ll want to dice your apple into pieces about the size of a pea then set them aside. This will not only ensure that the apple pieces will cook through, but also that you’ll get a piece of apple in every bite. YUM!

After you’ve diced your apple, you’ll want to round up all of your dry ingredients and combine them in a medium-sized mixing bowl. Once those items have been whisked, you’ll add in the wet ingredients and whisk to combine the wet and dry.

Next, you’ll fold in the diced apples and distribute the batter evenly into a muffin pan. If you choose not to use cupcake liners, you’ll want to be sure to line the pan with your choice of oil to prevent them from sticking. Now it’s time to bake!

Are Apple and Cinnamon Muffins Healthy?

Vegan Apple Cinnamon muffins can definitely be made healthy! If you’re looking for a healthy spin on this recipe, try swapping the vegan butter for an alternative such as coconut oil.

I know you’ll love this Vegan Apple Cinnamon Muffins recipe. These muffins are moist, perfectly sweetened and make for the perfect snack! Give this recipe a try and let me know what you think in the comments below!

Tools You Might Need to Make Vegan Apple Cinnamon Muffins: 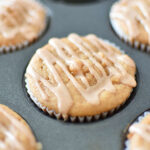 These muffins can be stored in the fridge for up to one week.