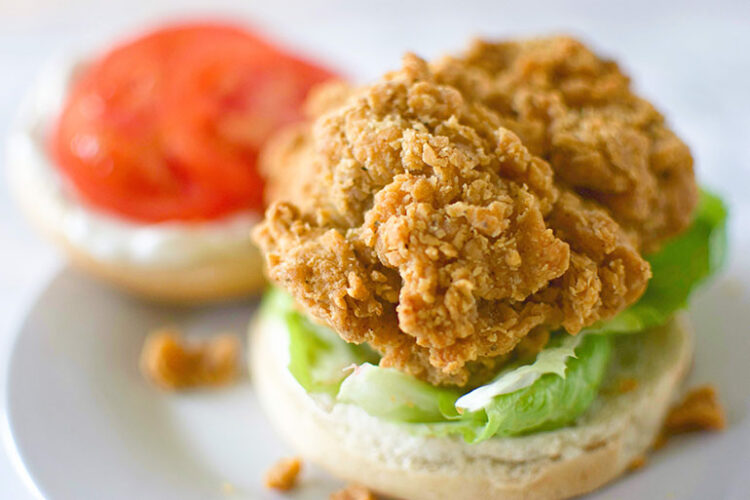 If you’re like me and try to keep an ear to these vegan streets, you already know about or have heard the name Atlas Monroe. If not, I’m here to fill you in! Atlas Monroe is a plant-based food company offering a variety of “meaty” options that even a life-long carnivore would love (but really- my husband devoured his).

I initially found them on Instagram via multiple accounts that I follow from the California area. When you see one of their chicken sandwiches pop up on your timeline, you can’t help but stop and gawk. Let’s be honest, they’re beautiful! They look meaty and amazingly crispy!

Last fall Atlas Monroe was featured on Shark Tank. I’m a big Shark Tank fan, so I of course tuned in. They shared their chicken sandwiches with the sharks and everyone was in disbelief at what they were eating. They all agreed that they had a great product on their hands. If I recall correctly, the owners even mentioned that they had previously won a fried chicken contest with them being the only plant-based chicken entry! That’s crazy!

Between repeatedly seeing their products on social media and their Shark Tank appearance, I knew I had to get my hands on some. Luckily soon after their episode was shown, they opened their direct to consumer ordering, which was perfect for me because there currently aren’t any vendors selling it near me!

I’m not gonna lie. Their products aren’t exactly cheap. Six of their Extra Crispy Fried Chick’n pieces will run you $22.99 ($3.83/piece). Considering what it actually costs to make the product, it’s a pretty sizable markup.

As a note, the production costs were disclosed on Shark Tank, but I can’t remember how much it was. However, when you think about it on a broader scale, you would probably pay $10-$15 for a Chik’n sandwich at one of the restaurants that serve their products, so in reality $3.83 isn’t a bad price. It just stings a little on the front end.

Me and @sirdricks are testing out the Crispy Vegan Fried Chick’n from @atlas.monroe! . Get the deets for my FULL review on the blog! Link in Bio! . www.icanyoucanvegan.com

Okay, this part stings a little too… Because these products are shipped frozen, they need to arrive on your doorstep as quickly as possible. Which means next-day air is a must. So yes, next-day air is your only shipping option and it’s gonna run you about $18. However, I’m sure pricing varies on where you’re located, so this may not be true for you.

During my first experiment with the Atlas Monroe Fried Chick’n, I followed the directions that came with the product upon delivery (can also be found here). I wasn’t interested in the deep frying method, so I tried the oven directions, baking it on 400F for 18 minutes.

I wasn’t entirely satisfied with the outer texture, so I lightly sprayed it with olive oil and tossed them in the air fryer for a few minutes. BOOM! This was the winner.

The breading felt like it had just been taken out of the grease! Since this was my first time trying it, I wanted to dress up my sandwich a little, but not too much as to override the seasoning. I whipped up my homemade Chick-fil-A sauce (can be found in this recipe), sliced some tomato and went to WORK!

Y’all, it was love at first bite. If you follow me on the ‘gram, be sure to check out my IGTV with the very first taste-test I did (I’ll be sharing soon!) alongside one of my besties, Dricks (he runs a really cool traveling company).

I couldn’t believe what I was eating! When you see a product being shared so much on social media, it’s easy to wonder if it’s being over-hyped. Well, I’m here to tell ya… it’s NOT! The breading was super crispy. I was even eating the little crispy bits leftover in the air fryer that had fallen off. OMG. Sooooo goooood!

Though the inside doesn’t look like much, it was tender with a meaty texture. I was shook. In case you’re wondering, it’s made from non-gmo wheat and is soy-free! I never knew wheat could taste so good!

This vegan chicken is definitely worth purchasing if given the opportunity. They’re currently on back-order and won’t be shipping until August (as of 2/18/20), but I would still go ahead and place your order because I read a comment (from their account) saying that they were phasing out of the direct to consumer aspect of their business. YIKES.

I really hope they reconsider because they’re currently only being sold at 4 locations. None of which are in NC! Plus, buying it straight from them is a lot cheaper than purchasing an entree from a restaurant.

Have you tried their products yet? I’d love to try their vegan ribs, but I’m too scared to mess up a good thing. Let me know your thoughts in the comments below!