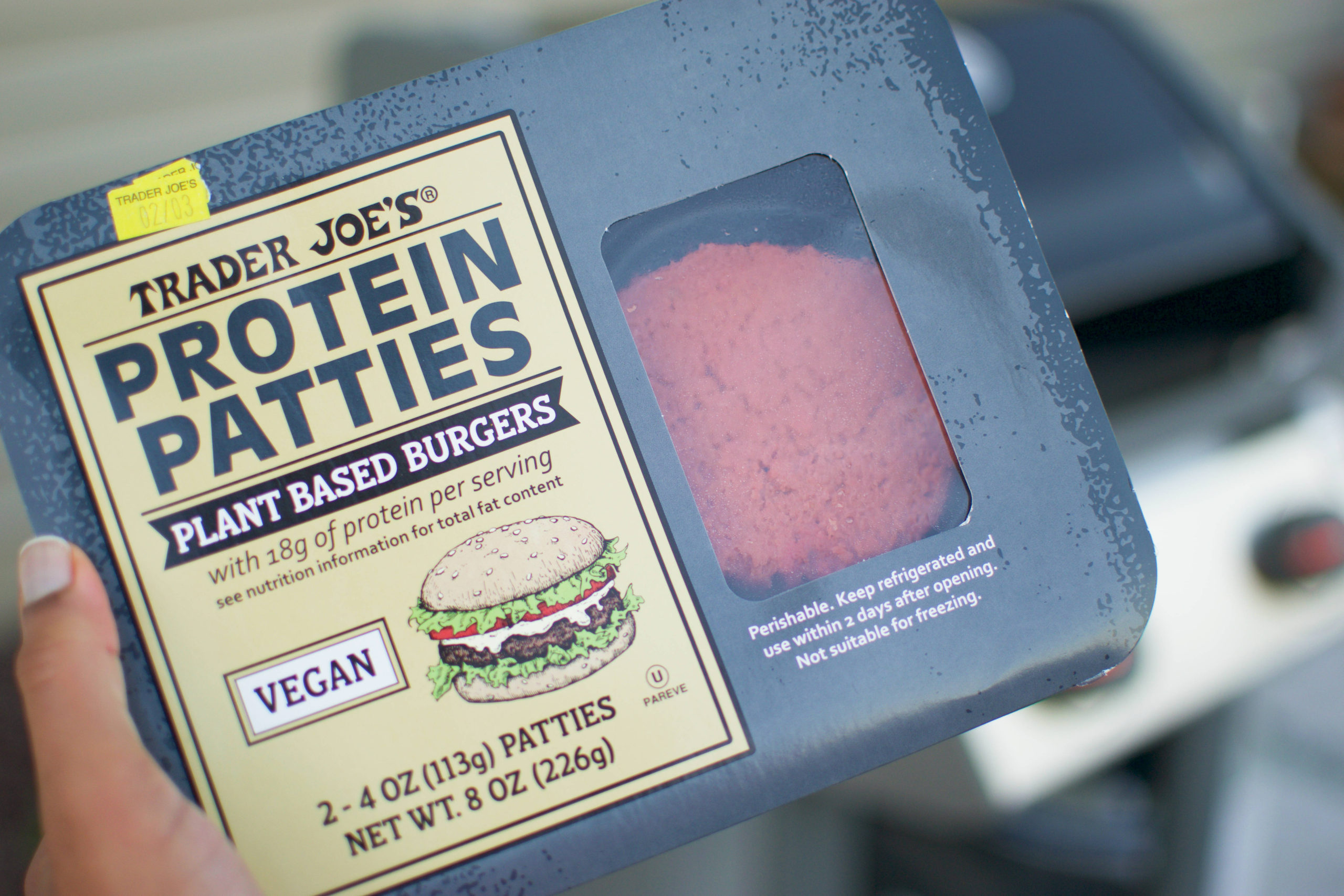 Sometime last year there was talks of Trader Joe’s coming out with their own private label meat-like burger. I’ll be honest, I thought it would take foreverrrrrrrr. But the time has finally come! Trader Joe’s Protein Patties hit stores in January 2020 and I could be more excited!

Grilling seemed like the best option, so that’s what I did. I preheated my grill, allowing it to heat up enough to help keep the patty from sticking. Once the grill was hot enough, I placed the burgers on the grill and cooked them according to package instructions for about 4 minutes on each side. I quickly removed them from the grill after they were done cooking, then slapped the patty between a bun (also from Trader Joe’s) and began my taste-testing. I decided against dressing up the burger a whole lot because I wanted to really be able to taste the burger, not a mountain of toppings. So I kept it simple with a few greens, tomato, ketchup and mustard.

My first thought about these burgers was in regard to the smell, which reminded me a lot of Beyond Burgers. I can’t really explain it, but it was kind of like this smokey, cooked meat smell. Not offensive or anything, just noticeable. It’s important to note that these burgers will remain similar in color as they cook. Yes, the patties will darken and obtain grill marks, but still will be a deep pinkish color. This is also consistent for the inside. After biting into these Protein Patties, I was pleased with the taste, but wished that I had cooked them a few minutes more so that the texture was more firm. I’m not sure if cooking it longer would have helped, but would have been worth a try. Overall, I thought the flavor was good. My omni husband also tried it and he enjoyed them as well. He took one bite and murmured “good, it’s good” as he inhaled the rest of it. SHOCKING!

I was curious about how these would taste, cooking them indoors on the stove. I realize that not everyone has access to a grill, so I wanted to experiment with an alternative cooking method. To cook them, I first heated up my cast iron pan with a little olive oil. Once it was heated, I added the patty to the pan. It’s important to note that I started with frozen patties this time. Why? Because when I purchased them from the store they were still frozen, so I decided to keep them that way (even though the packaging says they’re not suitable for freezing). To cook the first side, it took about 10 minutes. After flipping, I cooked the other side for about 5-6 minutes.

I’m happy to report that they were good! I was nervous about this because when I tried this with the Beyond Meat patties, it didn’t go so well. I think I actually prefer these on the stove rather than the grill. Why? Because I really enjoyed the outer texture that was created being on the whole patty instead of the few grill marks I was able to get from the grill.

Would I Buy Again?

YES. I would absolutely purchase these Protein Patties from Trader Joe’s again. Why? Though I wish the texture was more firm, it wasn’t off putting (like mush), they were easy to prepare, plus they’re pretty inexpensive. Pricing is really important to me, especially when it comes to what I like to call “fun foods.” These types of products are not typically part of my regular shopping, but I would probably pick up more of them if they were less expensive. For example: those $10 Impossible grounds would never make into my shopping cart on a weekly basis. NEVER. I think Trader Joe’s priced this product very reasonably. Especially considering Beyond Meat’s Version is currently being priced at $5.99. Sure, it’s only $.150 less, but if you’re like me, that $1.50 matters.

Have you tried these burgers? If so, let me know what you think by sharing your thoughts in the comments below!