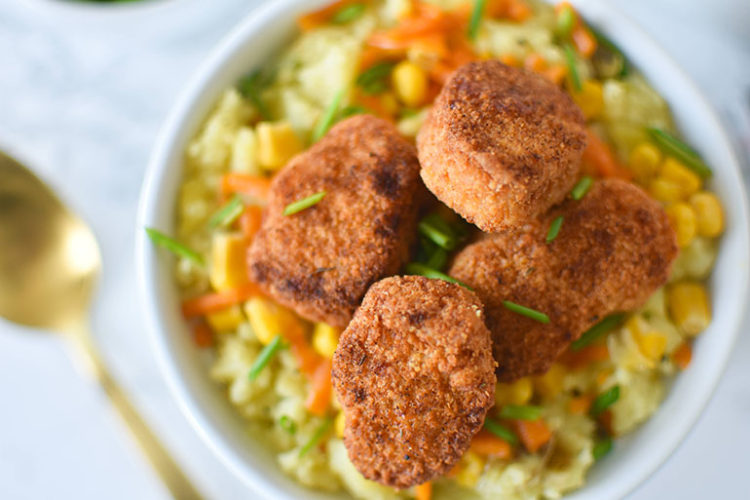 If you’ve never tried a KFC Famous Bowl, you’re in luck because I’ve whipped up the perfect Vegan KFC Famous Bowl alternative for you that tastes even better than the real thing! This homemade version is easy to make and is even more comforting and hearty than anything you’ll get at a drive thru. I used Alpha Nuggets to replace the fried chicken and the taste and texture worked perfectly!

What’s in a KFC Famous Bowl?

If you’ve never been to KFC don’t worry, you’re not missing out on too much. One of their most popular offerings includes what they call a “KFC Famous Bowl” that includes mashed potatoes as the base, sweet corn, shredded cheese, gravy and topped with bits of popcorn chicken.

Sounds pretty good right? But it would be better if it were vegan 🙂 Lucky for you, this Vegan KFC Famous Bowl can be made in the comfort of your own home, has a cajun twist and packs an even better flavor!

How to Make a Vegan KFC Famous Bowl at Home

Making a Vegan KFC Famous Bowl at home is really easy! Because there are just a few main components that are all relatively easy to make, you’d be surprised at how quickly you’ll find yourself enjoying one of your own.

To begin your Vegan KFC Famous Bowl, you’ll want to start with making the mashed potatoes. There are a few ways you can make mashed potatoes, but I always say, the easier the better! For these mashed potatoes I decided to use my favorite yukon gold potatoes. They’re really creamy, hearty and have great flavor. If you’re trying to be spot on with your DIY version of the famous bowl, perhaps you should consider a russet potato instead.

Making the mashed potatoes is easy. Simply add a few yukon gold potatoes to a pot of boiling water and allow them to cook until they are fork tender. My preference has always been to leave the skin on (less work and I like the added texture + nutrients), but you can remove the skin before boiling if you’d like.

Once the potatoes are finished boiling, drain the water from the pot and set the potatoes aside. In the same pot, place it back on the stove over medium heat and sauté the minced garlic along with a little bit of oil until golden brown. Add the cooked potatoes back into the pot with the garlic and use a potato masher to mash the potatoes. Once all are mashed, stir in the vegan butter, chives and salt + pepper.

The next component you’ll want to start on is the “chicken.” I’m a big fan of Alpha Foods and this seemed like the perfect opportunity to use their Alpha Nuggets. Y’all know I’m a little extra sometimes, so I decided to take things a step further by using a cajun seasoning blend for extra flare. YUM!

This part is completely optional, but if you ask me it really leveled this bowl up a notch! I simply sprinkled the cajun seasoning over each of the nugget pieces on both sides and cooked them according to package instructions.

Last, but not least we’ve got the sweet corn and cheese. These parts are super easy and can be done in a snap! I don’t know about you, but I’ve always got canned corn on hand, so I simply whipped out a can of it and warmed it in the microwave for a minute or so until it was warm. As for the cheese, I had a fresh bag of vegan cheddar cheese on hand so I used that to add to this bowl.

Now you may be wondering… what about the gravy? Y’all, gravy has never been my thing so I chose to skip it. However, if you neeeeeed gravy on your Vegan KFC Famous Bowl, try this recipe from Nora Cooks. I personally enjoyed this bowl with just the four components (mashed potatoes, vegan cheese, Alpha Nuggets, and sweet corn), but if you need a little something to replace the gravy, try your fav BBQ sauce! I experimented with this for my leftovers and it worked really well!

I know you’ll love this Vegan KFC Famous Bowl! It’s delicious, hearty, filling and super easy to customize according to your preferences! Give this recipe a try and let me know what you think in the comments below!

You can find a variety of Alpha products near you, here and a number of drool worthy ready-made meals you can pick-up if you’re on-the-go! Thank you for supporting the brands that support me! 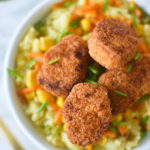