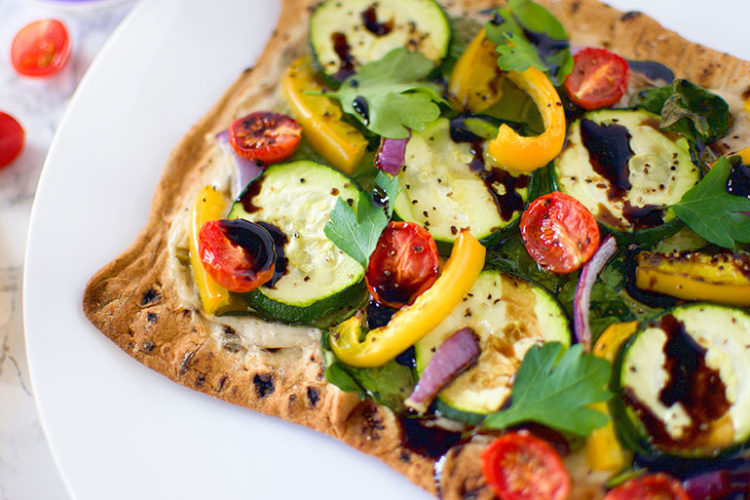 This post was sponsored by the wonderful people over at Good Karma!

When I first started eating a plant based diet, one of my favorite things to make was a flatbread. Not only is it a great way to clean out your fridge, it’s tasty and satisfying! It’s been entirely too long since I’ve enjoyed a veggie flatbread, so I decided to come up with a new and improved version to share with you all. This roasted veggie flatbread is easy to put together and you can customize it however you’d like!

To bring this flatbread to life, I wanted to try something different by using the new French Onion Dip from Good Karma. I typically use hummus as a base, but this French Onion Dip was calling me! It’s already prepared, so you just pop it out of the fridge and spread it over your flatbread. If you haven’t heard by now, Good Karma recently debuted a new line of plant-based Sour Cream and Dips that are actually lower in fat, sodium, and calories than other plant and dairy-based options. It also contains live and active cultures to give it a more authentic taste. Got allergies? This French Onion Dip is not only vegan friendly, but allergy friendly as well!

I’ll be honest…since changing my diet, I hadn’t even considered trying a plant-based French Onion Dip alternative until I discovered this one. It was nice to be able to use Good Karma’s French Onion Dip for not only this flatbread, but paired with some good old fashioned potato chips. The ones with the ridges of course, because those are the only ones appropriate for dipping! As I laid back on the couch with my feet up while snacking on chips and dip, a wave of nostalgia came over me!

Back to the flatbread! Another new addition is this simple and delish balsamic glaze. It’s really easy to make and helps to pull together all of the flavors from the flatbread. If you’re looking to host a gathering soon, this might be a great appetizer to consider sharing! Just slice up the flatbread into bite-sized pieces and you’re good to go! Or, if you’re like me… just eat the whole thing yourself. After taking these photos, this roasted veggie flatbread disappeared FAST!

Hungry yet? Get in the kitchen and whip up a roasted veggie flatbread for yourself! Wondering where to find Good Karma’s new French Onion Dip? You can pick it up at your local Sprouts nationwide (store locator here). Try it out and let me know what you think in the comments below! 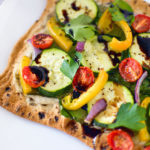