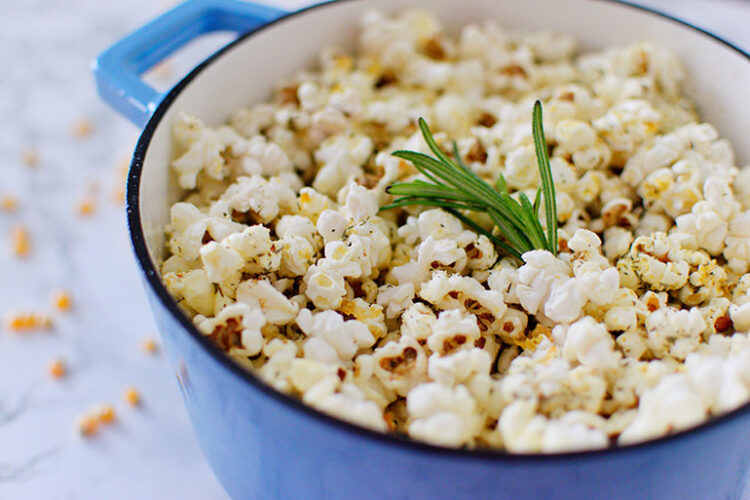 For a person who enjoys cooking, I rarely watch cooking shows. Part of it is because 98% of the time they’re not cooking vegan-friendly food, but the other part is because I’ve been on a home improvement + Grey’s Anatomy (or any doctor show really) kick lately and the cooking shows always fail to compete.

About a month ago I was watching Tia Mowry’s cooking show. I hadn’t heard of it before, but I was automatically intrigued because I used to LOVE Tia & Tamera growing up. Anything that had to do with them, I was all ears! Even though I still can’t tell them apart (I know one has a mole and the other doesn’t, but I don’t know which one has the mole lol),  I still enjoy watching them throughout their careers and every now and then I watch clips every now and then of The Real (with Tamera).

On this particular episode, Tia was preparing for a night with the girls. I don’t remember everything she made, but her Parmesan herb popcorn caught my attention! Her version wasn’t vegan, but I figured this would be fun to veganize. Have I ever mentioned how much I love popcorn?! If not, I’m saying it now. I looooove popcorn!

Once upon a time ago I purchased the Herbs+Spices popcorn from Trader Joe’s. Y’all know how much I love TJ’s, but I have to say… I was disappointed. It didn’t have as much flavor as I’d hoped for, so I decided to stick with their organic popcorn with olive oil from then on.

I’m happy to report that this Parmesan+herb popcorn hit the spot! I cooked it in my dutch oven (also great for making chili)! It’s perfectly seasoned and tastes amazing! Not to mention, it’s easy to put together! But I will warn, it can get a little dangerous… I got popped in the face by a hot kernel and it wasn’t so pretty. I’m being dramatic. It didn’t leave a mark, but it sure felt like it did! So take my advice and don’t get too antsy and open up the lid too soon. The popcorn might come flying out!

If you’re in need of a snack, you’ll definitely want to give this parmesan herb popcorn a try! You won’t regret it! Let me know what you think in the comments below! 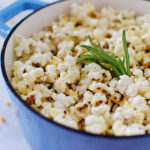 Check out this recipe for the vegan Parmesan.