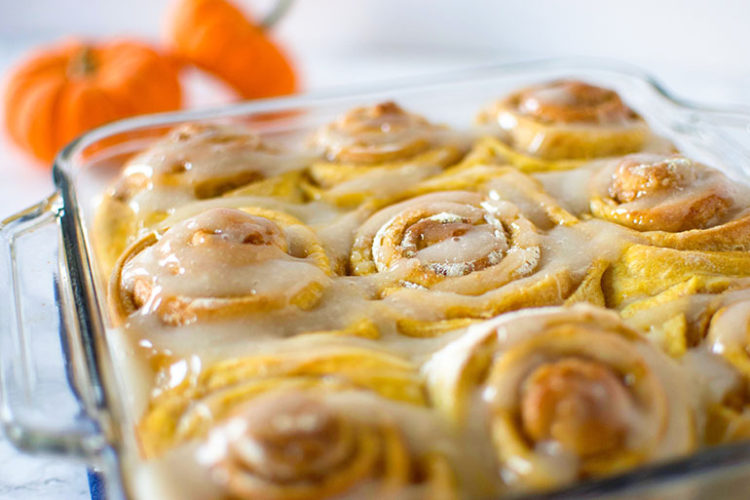 I’ll admit it. I’ve been going a little pumpkin crazy lately. This season I’ve made three new pumpkin recipes, not including this one! I think it’s safe to say that these Vegan Pumpkin Spice Cinnamon Rolls will conclude my pumpkin explorations for the season. At least it will be here on the blog… in real life, I’ve still got 75% of a can of pumpkin puree waiting for me in my freezer. I’m thinking I’ll probably use it to make some pumpkin spice oatmeal. There’s nothing more I love on a cold winter day than a nice bowl of warm, buttery oatmeal 🙂 The pumpkin flavoring is a welcomed addition.

Cinnamon rolls are one of my favorite desserts to make. They are pretty easy to put together and they pair well with a nice cold glass of almond milk, or a cup of hot tea. Though I love them, I realized it’s not in my waistline’s best interest to eat them regularly so I don’t make them too often. Another reason I love cinnamon rolls is that they’re so easy to make into different varieties. Add or subtract a few ingredients and you’ve got yourself something totally different than what you made before! These Vegan Pumpkin Spice Cinnamon Rolls were made using this recipe as a base. It was really easy to simply swap out a few items and replace them with more “pumpkin” appropriate ingredients.

To add a little variety to these Vegan Pumpkin Spice Cinnamon Rolls, I decided to top it with a cream cheese glaze. I think this flavor really adds to these rolls and gives them that little something different to set these apart from others.

How to Get Rid of these Vegan Pumpkin Spice Cinnamon Rolls

Whenever I make cinnamon rolls, I usually immediately have a plan in place to make them disappear. My husband is usually part of that plan. However, if he’s not up for it, I take them to work to ensure they get eaten!

This time, my husband requested four, which means I had four more to get rid of. I wrapped them individually and placed them on the counter at work along with a descriptive note. They were gone by lunch! The only downside to this is, I don’t know who ate them or what they thought of them. Well kinda… somehow two of my coworkers put two and two together and realized it was me. Both of them raved about how tasty they were! I love getting reviews on my food (good or bad) so I can make improvements if need be. So, if you’ve ever tried one of my recipes, be sure to let me know what you think!

Another way to get rid of these cinnamon rolls is to freeze them! Sometimes they’re just too good to give away, but I don’t want to feel pressured to eat them all before they go bad. In cases like this, I wrap them individually and place them in a large freezer friendly container. When I’m ready to eat them I simply remove one in the morning and it’s thawed in a few hours. I then warm it up for 10-15 seconds and voila! They’re ready for me to enjoy!

Thanksgiving is this Thursday! I think these Vegan Pumpkin Cinnamon Rolls would be great for Thanksgiving morning. You know, just a little something sweet before the big feast! And if you’re still in the mood for pumpkin, you could even make these for Christmas morning! Honestly, there really doesn’t need to be a special occasion for these rolls. Make them whenever you’d like! Don’t forget to let me know how they turn out when you do! Chat with me in the comments below! 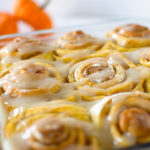