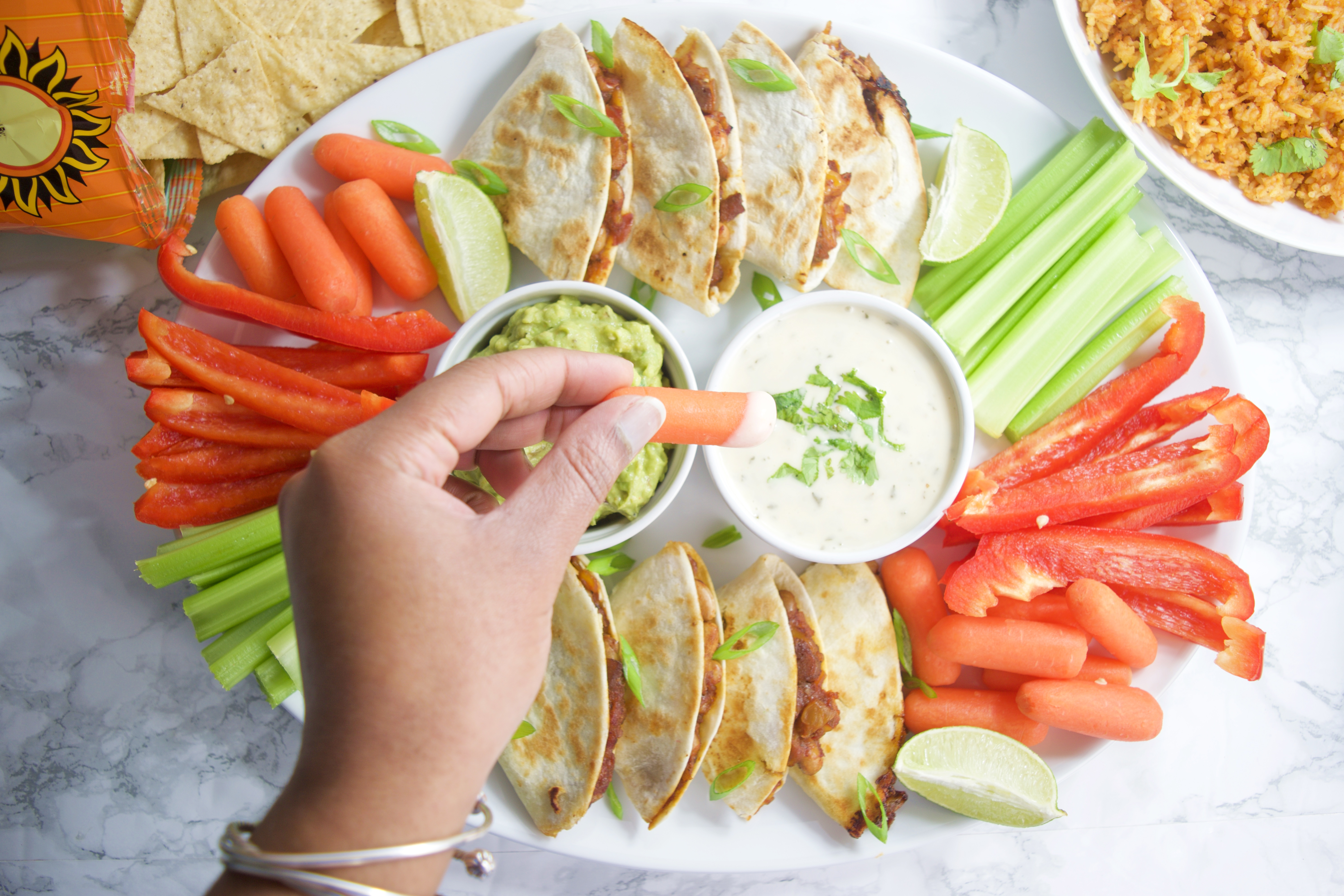 This post was sponsored by the wonderful people over at Sweet Earth Foods!

Two weeks ago America celebrated the biggest snack fest of the year… the super bowl. Personally, I’ve never been a fan of football and the only reason I tuned into the super bowl in the past was to catch the half time show. Occasionally I would stick around for the commercials, but my priority was and always will be THE FOOD!

Who wouldn’t want to indulge in a smorgasbord of different snacks and finger foods?! This year I was a little ill-prepared, so I had to improvise! I had some veggies, chips, some homemade dips, Mexican Rice, and a few boxes of Aloha BBQ Quesadillas from Sweet Earth Foods. This is the perfect easy vegan party tray to make if you’re in a pinch and short on time. Want to know the best part? Your guests won’t even know you threw this together in just a few minutes!

I started by slicing up the veggies first. Red peppers were my choice, but you could also add some green or yellow peppers for some added variety and color. I love a colorful vegan party tray! The carrots were already pre-cut, so those were added to the tray in about 15 seconds. Celery is also super easy to chop up, so that took no time as well!

You can’t have a veggie plate without dips right? So I decided to whip up some homemade vegan ranch by simply mixing the following ingredients together:

In addition to the ranch, I whipped up some homemade guacamole. I don’t really have a recipe for it since I usually just eyeball everything, but I added some red onion, jalapenos, salt, pepper, and a few diced tomatoes. It’s a delicious combination!

Last but CERTAINLY not least, I prepared some Aloha BBQ Quesadillas from Sweet Earth Foods. I don’t know about you, but when I think of party platters, I typically think of homemade goods. For example, those little appetizers that you’ve been slaving over in the kitchen for hours, making sure they’re just right. Folks, we’ve had it ALL WRONG this whole time! From now on, I’m totally adding in these tasty Aloha Quesadillas! They taste fresh and I’m positive that no one will be able to guess that they were frozen just a few minutes before.

I decided to do a combination of microwaving and stove top to cook them. I microwaved them for about a minute and a half, then finished them off in a pan on the stove to get a nice crispy browned tortilla on the outside. The quesadillas come two per box (WIN!) so after they were cooked, I cut each of them in half and placed them on the platter with the veggies. THAT’S IT!

Want to make your vegan party tray look really home-made? Add in some garnish! For this tray, I decided to add in a little fresh green onion here and there. Viola! Prepare for your guests to be amazed. Worried about your non-vegan guests giving your vegan quesadillas the side eye? Don’t be! They’re amazing and anyone with taste buds will enjoy them. The combination of cheesy and sweet flavors are sure to satisfy your cravings! You’ll definitely want to keep a box for yourself in the freezer. These will disappear fast!

If you’re hosting a party or have a gathering coming up, you’ll definitely want to keep these Aloha BBQ Quesadillas in mind! They’re so easy to make, plate, and enjoy! They’re pre-made so most of the work was already done for you. All you have to do is heat them! If you’re wondering where to find them, check out this link. You can even filter by products to find where you can buy these specifically!

Have you already tried these quesadillas? What did you think of them? If you’re planning on making a vegan party tray of your own, I’d love to know what you’d pair these with! Let me know in the comments below!